Strolling through the Marietta Church Cemetery, one of the first things that comes to mind is there’s an awful lot of history in this serene space overlooking Hardin Valley. For one, there’s many stones engraved with ‘Hardin,’ the name the larger community now bears in honor of Colonel Joseph Abraham Hardin (see story here.)

David Gallaher is notable among all his relatives as the first to takes his marriage vows in the Marietta Cumberland Presbyterian Church (MCPC), which now sits immediately adjacent to the cemetery. He married Jane Montgomery in 1840.

The church is one of the oldest in Hardin Valley, founded in 1838. The origin of the Cumberland branch of the Presbyterian church is a theological story for another day, but, in short, it sprang from the “Great Revival” of 1800 and “The Second Great Awakening.” The Cumberland church was organized by settlers in Kentucky and Tennessee who were unsuccessful in drawing educated and ordained clergy to preach to the masses in their outposts on the frontier. So, some exceptions were made, a rift occurred, and a denomination was born. And this is definitely a less than CliffsNotes summation of its creation.

The MCPC has played an important role in the history of Hardin Valley. The church first met in a building near the present-day Mount Pleasant Baptist Church on Buttermilk Road at the mouth of Hickory Creek, a location that is now under water. In the early years, MCPC was instrumental in establishing other congregations in the area, with three additions by the start of the Civil War.

The church was not immune to the deleterious effects of the war, and afterward began meeting in a school building. By 1880 the congregation had its new home, where it is still in use to this day, 142 years later.

Enjoy these photos of the church and cemetery: Another view of the church 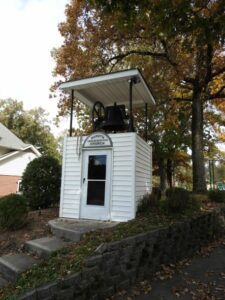 George Hardin Gallaher was born one year before the church 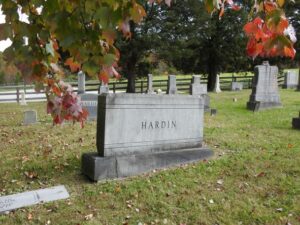 Hardin stone in the cemetery